For each troupe, you do not need to attend both dates, only one is perfect. Auditions are held on both days so that if you can not make one there is a chance you could make the other. It is also possible to audition for multiple troupes! Heck, you could audition for all three troupes in one day if you really wanted too (you’d be crazy for it but we kinda love that). Come and audition this weekend as it will be the only opportunity to do so for the entire semester!

Audition Tips for Mission and Toast

Come join us in this big ol’ game of pretend we call improv! Please note that this is not mandatory for you to read, it’s just for those of you who are a little bit anxious about doin’ the ol’ make-em-ups! Keep in mind that our priority during the audition process is for everyone to feel comfortable and have fun so we will explain everything you will need to know during the audition. This page is just so you can know a little more about what we like to focus on! (If you’ve read Mission’s tips, only tip #4 is different here. All new babies though!)

Improv is really a team sport! Your #1 goal is to make your partner look good and their #1 goal is to make you look good. This is especially important in an audition process where a lot of people have never done improv before. Even when scenes aren’t full time laugh riots, it’s important to us that we see people trying to get on the same page. Improv isn’t a vehicle for your stand up routine, it’s an opportunity to create something funny with another person and have fun! Try to focus on connecting with your scene partners and having fun with them! As a famous improviser once said:   “If you’re not having fun, you’re the asshole.”

One of the BEST ways to support your partner is to listen to them when they speak!! Guys! If you take anything away from this list, LET IT BE THIS! Listening is especially important in long form improv because we focus on one story for a long time. That may seem intimidating but listening to what your partner says and then taking time to respond makes the scene 100 TIMES EASIER!! In your first improv scenes you may feel this huge burden to spout out a bajillion funny things but you really don’t have to. The best thing you can do is listen to what your partner says and then use it. 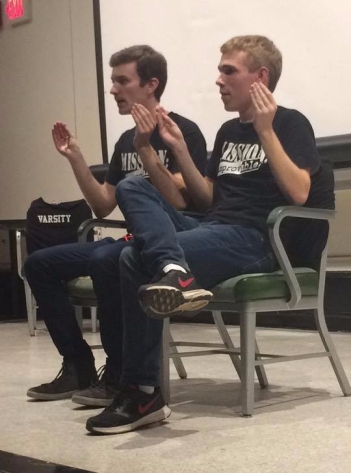 Another way to make your scene easier for both you and your partner is by agreeing with the “who,” the “what” and the “where” of the scene. If your partner is drowning and you tell them to stop doing the moonwalk, you clearly aren’t in agreement about “what” you’re doing or “where” you are. Most of the improv world encourages agreement by using the phrase “Yes And”. “Yes And” is typically the first thing you learn as an improviser because it teaches you to agree with the “who,” “what,” and “where” you are before you add to it! If your scene partner is drowning and you say “well sweetie, I told you we were gonna try sinking or swimming after that fiasco at the public pool!” then you’ve agreed with the “what” (struggling to swim), the “where” (in/near a body of water) and added the “who” (parent/child). In other words you’ve said “YES” you are drowning “AND” I’m your parent that is allowing this to happen. Knowing all of this information means you spend less time getting to know each other and more time playing and having fun!

The funniest thing in this world is reality. Your priority at first should be to play a person as realistically as possible. When in doubt, react realistically and you’ll figure out what’s weird and funny about your scene soon enough. Take it from improviser and actor Jason Mantzoukas:

“Don’t think everything you do has to be funny… all you need to do is be interesting, be specific, and if you need to be quiet for a while, that’s fine…”

You Only Audition for Mission: IMPROVable for the 1st Time ONCE! YOAFMIFTFTO! This is a judgment free zone and the rules of society do not apply in Mission Auditions. Push it to the limit. Do that weird voice you do in the shower or while you’re driving or when you’re robbing homeless men in Amherst Center! We love to see people that are completely unafraid to be their weirdest selves because Mission is just a buncha weirdos running in circles and screaming lies. Commit to whatever character you choose whether you’re drowning or robbing homeless men in Amherst Center!

Writing the comedies is a sacred art that requires strength, endurance and agility. To join the elite comedy organization known as Sketch 22 you must complete a rigorous training course that will test your mind, body and affinity for saying the word “swag.”

Just kidding (except for the swag part, that’s real)!!! Sketch auditions are really fun! Here are some tips to make them even more fun!

Sketch is not an improv troupe but that doesn’t mean that they don’t love to shoot the shit or the crippled dove or their twice removed uncle Randy who just won’t shut up. Be ready to do some light improv at the audition. This isn’t a huge deal, it’s the jazzercise of improv. It’s the power walk of improv. It’s the open-sparknotes reading quiz of improv. No one is expected to be an improv master, you’re just having a good time with new friends!

Comedy writing/acting requires playfulness and flexibility. In the words of our lord and savior, Amy Poehler:

“Even the most talented people don’t fight every day for every one of their jokes. There’s always some better way to do things when you’re working with good people…A lot of people say fight for what you believe in and don’t let them change it, but I want to say, fight less, and be open to the fact that other people might have a better idea.”

Change can be a good thing, embrace it.

SKETCH 22 IS FULL OF FUN-LOVIN FREAKS THAT JUST WANNA PLAY WITH YA!

(not in the gross way though)